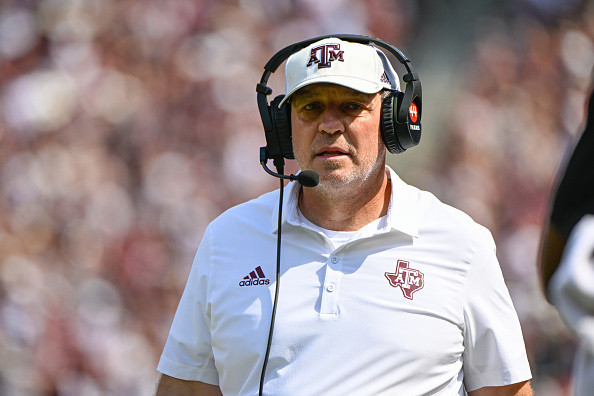 The Texas A&M Aggies were upset on Saturday afternoon 17-14 by the Appalachian State Mountaineers.

Just as they did last week against Sam Houston State, the big men up front struggled all afternoon for the Texas A&M offense. App State had consistent pressure on QB Haynes King, even when rushing only three defenders. King, who played in only his third full game as the starting QB for A&M, was forced out of the pocket often.

The whispers of uncertainty about King were growing louder after last week’s performance against Sam Houston State. The quarterback’s stat line against Appalachian State won’t quiet them. King went 13-of-20 for 97 passing yards while rushing eight times for 23 yards.

Is King the answer at QB for the Aggies? The jury is still out-but having an offensive line that fails to provide protection for a young passer will ALWAYS make for a long afternoon.

Strong offensive line play has been a staple for Texas A&M’s offense in recent years, but that is not the case for the Aggies thus far in 2022.

Running lanes were often congested or completely absent on Saturday for the Aggies, but running back Devon Achane was able to gain tough yards throughout the afternoon. That being said, Achane’s playmaking ability was severely underutilized for all 60 minutes of play.

The A&M running back scored his team’s first touchdown of the day with a 26-yard run in the second quarter. Achane would not see another carry for the remainder of the first half.

As the Aggies came out of halftime, offensive coordinator Darrell Dickey and head coach Jimbo Fisher continued to fail at creating opportunities for Achane to move in open space.

As possibly A&M’s most explosive offensive weapon, Achane carried the ball only 10  times for 66 yards and a touchdown. The Aggie RB would also take matters into his own hands with a kickoff return for a touchdown, Texas A&M’s second and last score of the game.

For all the good things that Texas A&M’s defense did- multiple penalties were called on the Aggies in situations that would have resulted in fourth downs for Appalachian State. The Aggies finished with seven penalties for 58 yards, all flags seeming to come at the least opportune moments.

The Aggies seemed to also be playing with a football coated in Crisco. The only two turnovers in the game were provided by the maroon and white offense-two fumbles. A&M fumbled the football two additional times, but were able to recover for a loss of yardage.

The Aggie front seven was fast. The Mountaineer offensive playmakers were faster.

With some of the country’s greatest facilities, seemingly unlimited resources, and a fan base with rightfully consistent high expectations; the narrative will for now remain the same for Texas A&M football.

Texas A&M believes that they should be a program mentioned each year amongst the usual suspects like Alabama, Ohio State, Clemson, etc. That will never happen for the Aggies until they can change the narrative that seems applicable in College Station- a team that vastly underperforms and disappoints each football season.