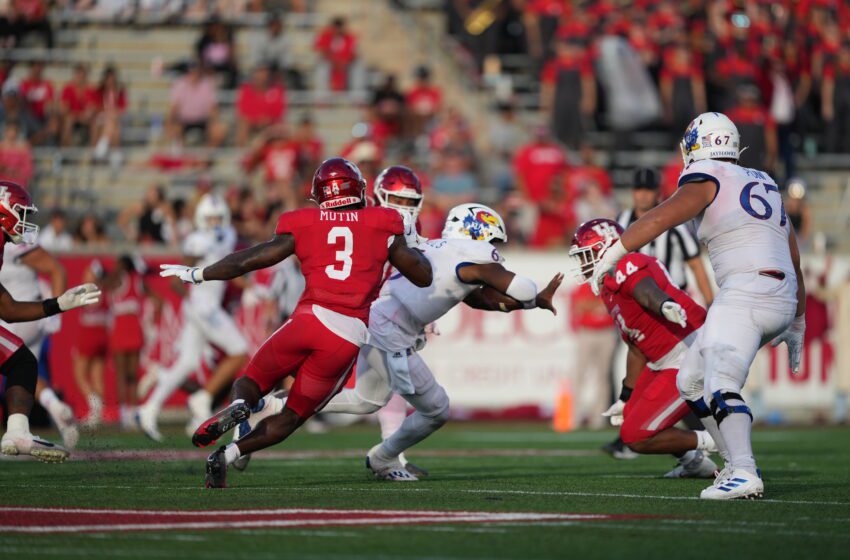 Houston Cougars linebacker Donovan Mutin (No. 3) aims to make a play against Kansas during UH’s loss to the Jayhawks. (Courtesy Houston Athletics)

The Houston Cougars football team is looking to leave the last two games in the rearview mirror.

After a thrilling season-opening win against UTSA, the Cougars have lost back-to-back games to two Big 12 opponents which have left them in need of a strong response when they take the field against Rice.

“Make no mistake about it, we are at a pivotal point towards what this team is,” Houston head coach Dana Holgorsen said on Monday.

The Cougars have not only lost two straight games, but they have done so with recurring issues such as undisciplined mistakes, particularly costly penalties, and inconsistencies in performances in all three phases of the game.

The offense has been inconsistent in putting together drives. In the first quarter of UH’s game against Kansas, the Cougars put up 14 points, and then were held to only 16 the rest of the game.

UH’s defense had flashes of dominance in the first two games, but also had lapses when it came to blown coverages and missed tackles and allowed two game-tying drives with only 23 and 37 seconds against UTSA and Texas Tech respectively.

Against Kansas, the defensive unit started the game by forcing two straight three-and-outs and then allowed the Jayhawks to score on all but one possession after that, including six straight touchdown drives. The lone drive that didn’t end in a score for Kansas ended in a knee to end the game by quarterback Jalon Daniels.

As for Houston’s special teams, they have had their lapses as well. The special teams unit committed penalties on two punt returns the first two weeks that wiped away touchdowns from Nathaniel Dell, suffered from multiple kicks out of bounds on kickoffs and even a missed point after touchdown against Kansas. Houston has committed 10 or more penalties in all three of its games to start the 2022 season.

Houston is looking to put the woes behind them and focus on Rice before American Athletic Conference play begins. UH defensive lineman Derek Parish said postgame after Kansas the team’s goal of winning a conference championship is still attainable. On Monday, Holgorsen mirrored that comment.

“We got to turn the page and move on,” Holgorsen said. “We still got things ahead of us that we can accomplish and be proud of. Nobody is happy about 1-2 with two tough losses against two good teams. We’ve played three bowl teams. They’re all three going to be bowl teams, so get used to it. It is what it is going to be like here.”

Across the American Athletic Conference, UCF quarterback John Rhys Plumlee was named the league’s offensive player of the week for his 300-yard passing and 100-yard rushing performance in a 40-14 win against Florida Atlantic. He had three total touchdowns in the win for the Knights (2-1).

Tulane (3-0) senior linebacker Nick Anderson, who the Cougars will see on Sept. 30, won the conference’s defensive player of the week honor. Anderson had six tackles and a tackle for loss in the Green Wave’s 17-10 win against Kansas State.