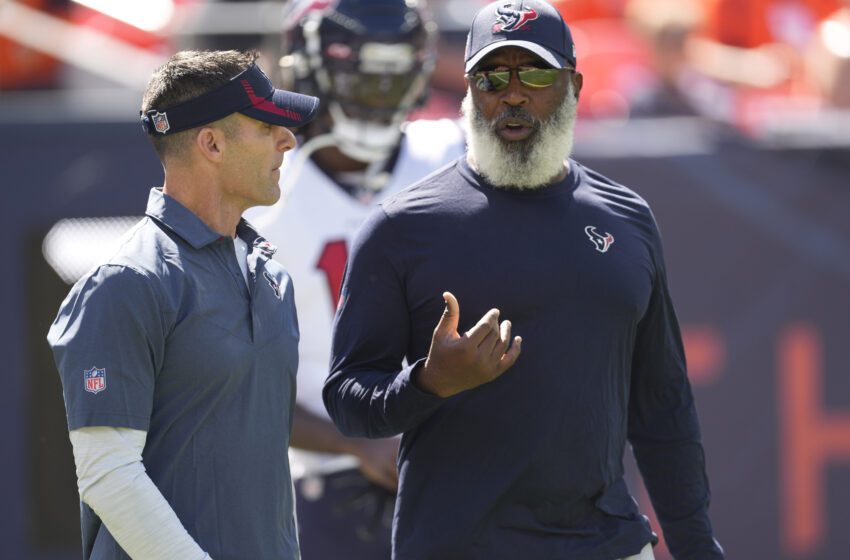 Texans coach Lovie Smith left Chicago with a storehouse of memories accumulated during his nine seasons as the Bears’ head coach.

When he returns to Soldier Field on Sunday, Smith would like to pack one more memory into his Chicago collection – his first victory as the Texans’ coach.

There’s an army of reasons Sunday could become an extra-special day for Smith, beginning with how desperate the Texans are to win their first game and even their record to 1-1-1.

After blowing fourth-quarter leads against Indianapolis and Denver, the Texans are three-point underdogs against the Bears.

“We’ve got to win a game,” Smith said this week. “They’re the next opponent, and I’m excited about going there.”

This won’t be Smith’s first appearance as a head coach in Chicago, where he led the Bears from 2004 to 2012 and compiled an 84-67 record, including 3-3 in the playoffs. He was 79-55 over his last eight seasons that included a Super Bowl XLI loss to Indianapolis and an NFL Coach of the Year award.

Smith’s last team finished 10-6, but he was fired by second-year general manager Phil Emery, who replaced him with Marc Trestman – a disastrous decision. Trestman and Emery were fired after two seasons together.

In 2014, his first season coaching Tampa Bay, Smith returned to Soldier Field and lost 21-13. Texans’ fans may have heard of Smith’s starting quarterback in that game who threw for 341 yards – Josh McCown.

The next year, which turned out to be Smith’s last with the Buccaneers, they lost 26-21 to the Bears in Tampa.

Even though he has a lot of friends in Chicago, this trip won’t be for socializing. Smith will leave that up to his wife, MaryAnne.

“I think MaryAnne’s going up Wednesday,” he said. “She’s from Chicago, and we still have a home there. We had a lot of great times in Chicago. I’m appreciative of everything that happened there.”

The Smiths have a fondness for the Chicago area. Before coming to Houston as the associate head coach/defensive coordinator under David Culley last year, Smith coached at the University of Illinois – 135 miles from Chicago – for five seasons.

But it’s Chicago and the historical Soldier Field that mean so much to Smith and his family. He remains the third-winningest coach in franchise history behind George Halas and Mike Ditka.

“Yeah, I do have a lot of great memories from there,” Smith said. “I’m so grateful to the McCaskey family for what they did for me and my family. I made lifelong friends. Coaching at Soldier Field gave me a lot of special memories. We had some great victories there. It’s special going back.”

Publicly, Smith won’t admit how special it would be to win his first game as the Texans’ coach where he was given the first of his three head-coaching jobs. He’ll tell you the Bears are just the third game on the schedule, another team the Texans hope to defeat.

Privately, Smith’s friends and family know how competitive he is. It’s human nature to want to win in a city where you experienced so many terrific times before getting fired after a winning season.

“I’ve been very fortunate,” Smith said. “I’ve got my dream job here. I’m coaching my home-state team, and we need a win, no matter who we’re playing. To get my first victory as the Texans’ coach be would be special in itself.”

Smith has problems that go beyond a second Chicago homecoming. It’s exasperating for the Texans to know they were in position to beat the Colts and Broncos. They outscored them 29-9 in the first three quarters, but they were outscored 27-0 in the fourth.

Smith would like for his team to finish what it started, not faltering after building a fourth-quarter advantage.

“It’s one thing if you’re not even in it and you lose as opposed to knocking on the door and being so close,” he said. “When you’ve got a young program like we do, you’re going to have growing pains.”

The coaches have to make sure the players are confident they can win with fourth-quarter leads and not lose confidence when they fail to protect those advantages as they did against the Colts and Broncos.

“First, you look at the plays,” Smith said about dropped passes and penalties that contributed to the loss at Denver. “If we’d made just one of those plays. Guys see that and see that it was so close.”

Smith, offensive coordinator Pep Hamilton and the rest of the staff have to take every precaution to avoid what happened to the Texans the last time they played at Soldier Field. On Dec. 13, 2020, it was 34 degrees, and the Texans suffered their worst loss of the season.

The Bears pulverized the Texans 36-7. That 29-point deficit was the most lopsided of the season. Quarterback Mitchell Trubisky threw for 267 yards and three touchdowns without an interception. His rating was 126.7.

Hamilton has to do something to get quarterback Davis Mills and his receivers on the same page. He has to make sure Dameon Pierce gets more than 20 carries against the NFL’s worst run defense. Yes, the Bears are worse than the Texans, surrendering 189.5 yards a game rushing.

Hamilton knows the formula to win at Soldier Field, where he coached under Smith, but having his players execute the game plan has been difficult through two games.

Smith’s defense should be in good position against second-year quarterback Justin Fields. Like Mills, Fields is struggling. His rating is 53.6. The Bears have completed only 15 passes – fewest in the NFL by 13. Fields has the highest percentage of off-target passes at 28.6 percent.

As for preparing his players for what might be the Texans’ best chance to win a road game this season, Smith said, “What you want guys to think is, ‘I’ve got to do more in the next game.’ Starting with me, all of us have to prepare a little better and do a little more. It’s as simple as that.”

John McClain can be heard Tuesday, Wednesday and Friday on Sports Radio 610 and Monday and Thursday on Texans Radio. He does three weekly Houtopia podcasts for 610. He also can be read three times a week on SportsRadio610.com.