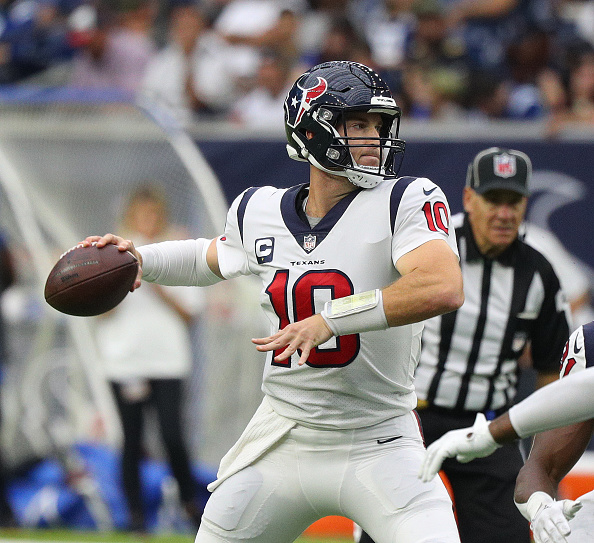 The fate of the franchise rests on the right arm of Texans second-year quarterback Davis Mills.

As first-year coach Lovie Smith prepares his team for the first game of regular season Sept. 11 against Indianapolis, the coaches and players know – but won’t admit – how much pressure Mills is under.

Mills plans to reward the team’s faith in him for not acquiring another quarterback to compete for his starting job. It’s Mills or bust in Year 2 of the massive rebuilding plan entrusted to general manager Nick Caserio.

If Mills can show in his first full season as the starter the kind of improvement Caserio, Smith and offensive coordinator Pep Hamilton expect him to make, the Texans could be a wild-card contender in 2023. If he doesn’t and Caserio is forced to find a franchise quarterback in next year’s draft, it could delay the team’s playoff vision while the next quarterback adjusts to a starting role in the NFL.

There’s so much at stake this season. After winning four games in each of the last two seasons under Bill O’Brien, Romeo Crennel and David Culley, the Texans might win five or six this season. Most important is Mills’ development.

If Mills plays well enough to convince the Texans he’s capable of becoming a franchise quarterback, Caserio can use his 11 draft choices, including two first-round picks, to continue to build the roster with non-quarterback talent. Then, when the new league year begins in March, the Texans could be more than $80 million under the cap, allowing Caserio for the first time to sign a couple of expensive free agents to fill need positions.

When Caserio promoted Smith to head coach and Hamilton was elevated from quarterbacks coach to offensive coordinator and play-caller, they were unified in their belief that Mills deserved to be the starter this season.

Despite unfounded national reports the Texans were interested in trading for Baker Mayfield and Jimmy Garoppolo, Caserio, Smith and Hamilton continued to believe in Mills. And they should have based on his rookie season.

Despite starting only 11 games at Stanford and lasting until the third round, Mills was the second-best rookie quarterback in the league behind New England’s Mac Jones.

Mills threw for 2,664 yards, connected on 66.8 percent of his passes and finished with 16 touchdown passes and 10 interceptions. His rating was 88.8.

Over the last four games, Mills was clearly the best rookie quarterback in the NFL. The Texans were 2-2. During that closing stretch, Mills completed 84 of 122 (68.9 percent) for 927 yards and eight touchdowns. He threw two interceptions and compiled a 106.1 rating.

In the Texans’ last game against Tennessee, the Titans had to win to secure home-field advantage in the AFC playoffs. Mills saved his best for last.

Don’t forget Mills played with the league’s worst running game and a defense that ranked 31st.

With Mills firmly entrenched as the starter going into the offseason, veteran Kyle Allen was signed as the backup.

Fast-forward to preseason. The Texans beat the Saints, Rams and 49ers. They played with and against a lot of backups. After Mills’ first seven series, fans hoped he was playing possum. With Mills in the lineup – and playing without a lot of starters – the offense had six punts and a turnover before he finally threw a touchdown pass to Nico Collins against the Rams.

Counting that scoring pass to Collins, Mills generated three touchdowns on his last seven series, including a 1-yard run by rookie sensation Dameon Pierce and a 16-yard pass to Chris Moore. Mills had another touchdown pass to Collins called back because of a penalty.

Dating back to the end of last season, Smith has never wavered in his support of Mills after watching him as a rookie on and off the field.

“Davis is our starting quarterback, and I love what he’s going to do leading us,” Smith said. “Getting to know him (and) after he started playing and we started watching all the (other rookie) quarterbacks, that’s when I said, ‘This guy’s in the mix with the rest of the first-year signal callers that I think will be good players in the league.’

“That confidence in him has grown, every step along the way right up until the first drive of the second half (against San Francisco).”

The coaches like Mills’ size (6-4, 225), arm strength, intelligence, confidence, toughness, work ethic, leadership ability and the way he recovers from a poor throw or a bad game.

Mills got a lot of ammunition in the offseason. Caserio gave him a new running back (Pierce) who could be the team’s best since Arian Foster, two new starters in the offensive line (first-round guard Kenyon Green and veteran free agent guard A.J. Cann), a new offensive line coach (George Warhop) and more talent on a defense that could be significantly improved.

Mills and the defense should benefit from an improved running game.

“We want to be a tough team that loves to run the football, and I think that’s what we (tried) to establish throughout the preseason,” Smith said. “That should open up things. And by saying that, that doesn’t mean we don’t want to be a good passing team.”

And that starts with Mills and his performance against the Colts, a team that dominated the Texans in their AFC South series last season.

“Game plan-wise, (we) want to keep executing our offense at the highest level possible,” Mills said. “I want to continue to up my accuracy and make sure I’m getting my guys out on the edge chances to make big plays. Every rep you get adds to your experience level, your memory bank. The more reps I get, the more comfortable I am.

“The sky’s the limit with what we’re capable of doing on offense. I think it’s going to be very unique to what we’re going to do compared to different teams around the league. It’s going to be exciting kind of pulling some tricks out of the bag once we get to Week 1 versus the Colts.”

And Week 1 can’t come soon enough for Mills, Smith and Hamilton to show how much better the offense – not to mention the team – might be in a season in which the experts predict the over/under on their victories at 4.5.

–John McClain can be heard Tuesday, Wednesday, and Friday on Sports Radio 610, as well as Monday and Thursday on Texans Radio