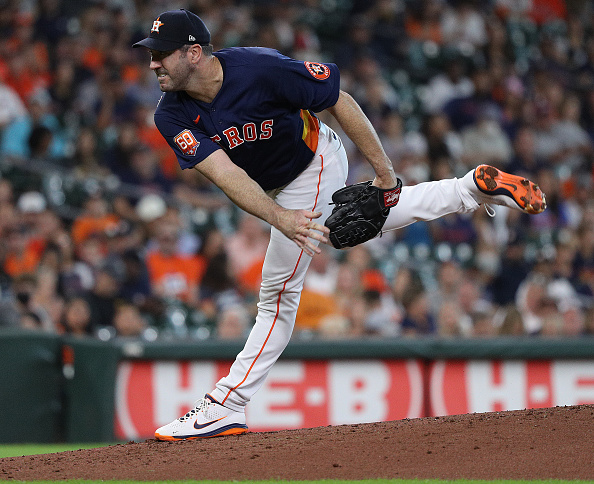 Justin Verlander should be ready for the playoffs. (Photo by Bob Levey/Getty Images)

On September 1st, all MLB teams had the luxury of expanding their rosters from 26 to 28, comprised of an even split of 14 pitchers and 14 position players. That has been helpful for the Astros, who currently have injuries to their best starter and best reliever, Justin Verlander and Ryan Pressly.

For Verlander, it’s apparent that Houston aims to be as cautious as possible with getting him back on the mound. He is eligible to return as early as Sept. 14, but based on the slower approach to his rehab, it doesn’t appear that he will be back that soon; instead returning in the latter half of the month to try and get one, maybe two, tune-up starts to prepare for the postseason. Pressly, meanwhile, should return in a matter of days if the latest updates are accurate from the clubhouse.

The return of these two arms could result in an easier decision for the Astros as they likely will send the two players back down that came up for the two injuries: Brandon Bielak and Seth Martinez. However, come October, when the postseason roster limits kick in, there will be another odd man out.

Rosters shrink back to 26 in the playoffs, with an even split still enforced, resulting in a cap of 13 pitchers. Teams typically only need and use a four-man rotation in the postseason while carrying nine bullpen arms, with built-in off days during each series allowing them to keep four starters on regular rest. Additionally, for the Astros, it’s all but sure that they’ll have a nice break between their last regular-season game on Oct. 5 and the first game of the ALDS on Oct. 11, as they should earn the right for a first-round bye to sit out the Wild Card round with one of the best records in the American League.

So, albeit a good problem to have, how do they take their pitching staff with an abundance of starting-caliber arms and solid bullpen arms and construct the best playoff roster?

Who makes the rotation?

The top two of the rotation are easy decisions, if healthy: Justin Verlander and Framber Valdez. Verlander is still in line to win his third Cy Young award this year, and one could argue that Valdez is in that race, though not a frontrunner, with his incredible string of quality starts. They’ll be about as good of a 1-2 punch as you can ask for this season.

That leaves two slots for the other five starters the Astros are using right now: Cristian Javier, Luis Garcia, Jose Urquidy, Lance McCullers Jr., and Hunter Brown. Starting with Javier, he would make an excellent candidate to move to the bullpen since that has precisely what the Astros did with him last year, and he’s had success coming into a game in relief in the past and did so in last year’s playoffs.

Urquidy has had a mix of usage over the last three postseasons, both as a starter and reliever, and has had a relatively successful time doing so. Though, having gone at least seven innings with two runs or fewer in four of his last six starts, he may be hard not to put in the rotation. Garcia, meanwhile, has gotten roughed up recently, giving up three or more runs in six of his last seven, which, if not turned around, could keep him out of the rotation.

Then, there’s McCullers Jr., who is only four starts back after his return from his forearm injury, though he appears to be fully healthy. When at his best, you could put him behind Verlander and Valdez and have a filthy 1-2-3 of the rotation. He could be a weapon at any point of the game, though, as we all remember from the infamous 24 straight curveballs he tossed out of the bullpen to close out the 2017 ALCS to send the Astros to the World Series.

Finally, the wild card is Houston’s top prospect, Hunter Brown. Brown was called up and made his MLB debut earlier this week against the Rangers and had an incredible start to his career with six shutout innings while allowing just three hits. Already touted as the potential next Justin Verlander, how will he fare leading up to the playoffs, and could it earn him a roster spot?

Who moves to the bullpen, and who gets moved out altogether?

So, assuming the Astros use the typical four starters and move some of those arms to the bullpen, who’s getting left out? Outside of the starters previously mentioned, and assuming the options of Bielak and Martinez, that still leaves one more spot to cut to get down to 13.

Ryan Pressly will be the closer as long as he remains healthy, and you’d assume after getting Will Smith at the trade deadline and being their only left-handed reliever, he’ll be a lock as well. That leaves Bryan Abreu, Phil Maton, Rafael Montero, Hector Neris, and Ryne Stanek.

Abreu has been electric in the second half of the year, not allowing an earned run since July 13, and in the starts since, he has given Houston a 0.63 WHIP and held opponents to a .106 average. Maton has also had strong performances this year and allowed just one run in the 2021 postseason, where he appeared twelve times.

Montero is who the Astros have leaned on in Pressly’s absence, using him as their closer when needed, and he has lived up to the job and has notched twelve saves this season while blowing only two. Neris has been a key set-up man and holds the fifth spot in the league with 24 holds. Then there’s Ryne Stanek, who sits with a 1.17 ERA and 52 strikeouts in his 46.1 innings of work in 2022.

It’s not a decision that will come easy and may come down to which arms have the best or worst final weeks of the season. Still, when you have too many good arms to fit onto a roster, that’s an envious position to be in, and the Astros will be able to benefit from it come October.